From the Study Hub to immersive workshops, 21 Gratitudes is home to all of Ya'acov & Susannah's online Movement Medicine offerings.
21 Gratitudes

Ya’Acov Darling Khan, the author of the best-selling Jaguar in the Body, Butterfly in the Heart (Hay House 2017) and Shaman (Hay House 2020), is known for his blend of down-to-earth strength, humility and humour. He is acknowledged as a practicing shaman by people who work with him world-wide and by indigenous elder shamans and communities from the Arctic to the Amazon.
Biography

Susannah’s being, work and life are all about connection: body, heart and mind; individual self with the community of life on earth; the manifest and the world of spirit. Susannah’s knowledge of the unique magic inside every single one of us supports others to dare to share our inner worlds.
Biography

We recognise relationship as spiritual practice. After all these decades of a potent cocktail of love and hate, seeing and blindness, hurting and healing, we have come to a new ground in the space between us. On this ground, we are discovering the delicate and demanding work of breaking the chains that have bound us to this ancient battle between feminine and masculine inside us, as well as between man and woman.
Our Relationship

Writing is powerful part of our lives, we have written four books including Ya’Acov’s best-selling Jaguar in the Body, Butterfly in the Heart (Hay House 2017), Shaman (Hay House 2020), Movement Medicine (Hay House 2009) and The Walrog.
Book Library

Music is medicine and at the music medicine shop we curate a spectrum of music that support journeys of healing and transformation through embodied movement and song. Between us we have created 10 CDs and we are proud to share them with you. Enjoy!
Music Medicine Shop

Join our growing community and stay up to date with all the latest news in the Movement Medicine world. 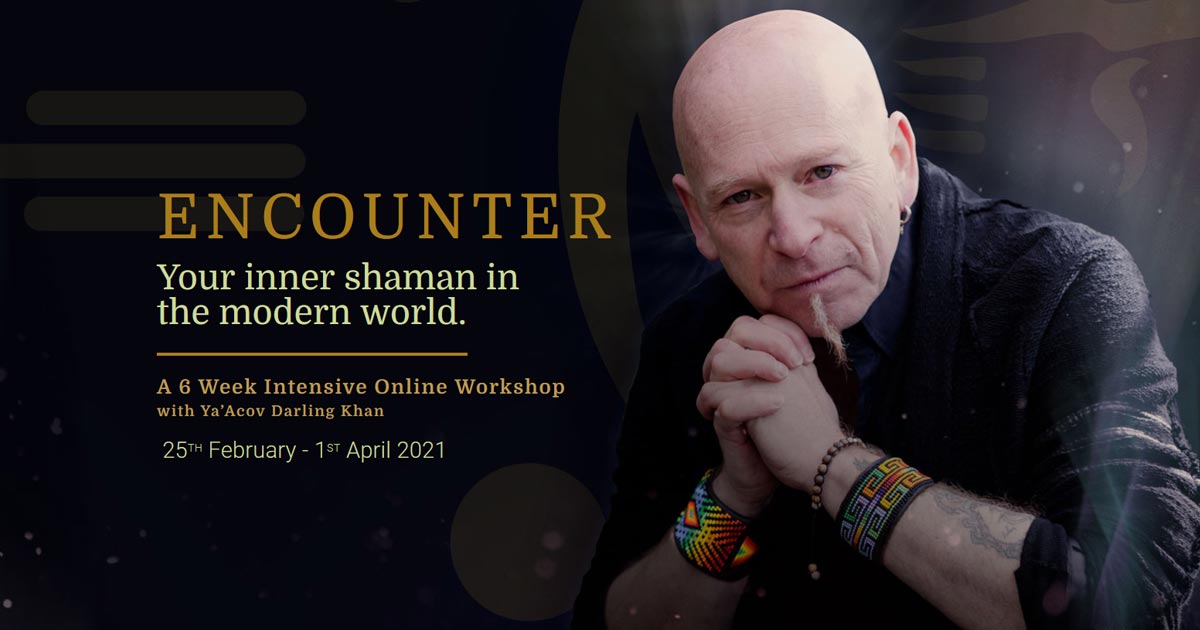 Ya’Acov Darling Khan, the author of the best-selling Jaguar in the Body, Butterfly in the Heart – the Real-Life Initiation of an Everyday Shaman (Hay House 2017), and the recently released 'Shaman – Invoking Power, Purpose and Presence in the Core of Who YOU Are' (Hay House March 31 2020), is known for his blend of down-to-earth strength, humility and uplifting humour.

He is acknowledged as a practicing shaman by the people who work with him world-wide and by many indigenous elder shamans and communities from the Arctic to the Amazon.

Travelling the world for more than three decades to work with groups delivering Movement Medicine, Ya’Acov has spoken to audiences across the globe at some on the most pre-eminent platforms driving the transformation of world culture and sustainability (California’s Esalen organisation, The Embodiment Conference), as part of line-ups which include our most influential voices of spirituality today including Marianne Williamson and Ken Wilber. Presently, he is offering his work online through 21 Gratitudes and his one-to-one work.

Ya’Acov’s message? Contemporary embodied Shamanism, and the Inner Shaman in YOU, far from being irrelevant, fantastical and a way of avoiding reality, can provide keys to restoring and evolving our connection to ourselves, to each other and to the power and beauty of nature and solving our interpersonal and world issues in the process.

As early as age 7, Ya’Acov, the son of an entrepreneur raised near Liverpool, felt drawn to the connection with the spirit world that shamanism invites.

With age, the calling to explore this world intensified. After struggling for years to come to terms with a perception of life that only traditional Shamanism could explain, it was being struck by lightning on a golf course that proved to be the awakening which was to change the course of his life forever.

So began Ya’Acov’s three decades of study and practice with spiritual teachers and Elder Shamans from the Sami (European tradition), and Achuar and Sápara peoples of the Amazon.

“Along the way I had to carve out a sense of normality and accept my soul speaks the language of dance, ritual and prayer. Re-awakening a sense of the magnificence, potential and splendour of creation, and providing tools for being as creative as we can with our healing and the more challenging aspects of life in a body on earth in as many people as possible, is the blessing I am lucky enough to call my job.” says Ya’Acov.

His work is inspiring, contemporary and practical, and Ya’Acov’s audience includes people from all walks of life. In a time in which western society has become disconnected from ancestral and natural wisdom, much of his work is about education and removing the unhelpful mystique of the term ‘Shaman,’ meaning traditional healer.

His 34-year marriage and partnership with ‘Movement Medicine Woman’ and wife, Susannah, with whom he is Co-Director of The School of Movement medicine and Co-Author of Hay House published Movement Medicine, forms the loving foundation and union for a life dedicated to the transformation of our world.

“As a species, we are at a cross-roads. I have a strong vision for a future in which we have evolved our way of living to a more equitable, sustainable and ultimately much more fulfilling existence as part of the web of life that sustains us. Our work? To reach as many people as possible and support them to know who they really are, find their purpose and live meaningful lives.”

Shaman
Jaguar in the Body, Butterfly in the Heart
Movement Medicine

Ya'Acov Darling Khan's journey reveals the hard path that goes from a sincere but innocent day-dreaming about shamanism, to the struggles, doubts, failure and eventual victories to be found for those who travel far enough and persist for long enough to discover the secrets of shifting consciousness, and then bring them back to the world of our everyday affairs. What I love about him is that his passion for the Spirit has always been so strong, and was not broken when ego-driven fantasies were shattered again and again by the bitter-sweet kiss of everyday reality"
- Victor Sanchez, Researcher, Author, Teacher and Founder of 'El Arte De Vivir a Proposito' (the art of living purposefully) and toltecas.org
Ya'Acov is a medicine man of the highest integrity. His shamanic skill and embodiment transcend culture to reach the universal place of humanity and spirit. One doesn't declare oneself a shaman, the people do. When we are in the rainforest together, the indigenous people line up for healings with Ya'Acov, who works side by side with the elder tribal shaman."
- David Tucker. Director at Pachamama Alliance
Over the years, Ya'Acov and I have worked together in my village and in the UK where I come each year to join his and Susannah's Long Dance ceremony. I have come to know him as a friend. He is a very genuine and compassionate shaman. He has put his knowledge in the service of healing through music, sound and movement, and leads very powerful ceremonies that transform thousands of people helping them to deal with their suffering and answer their most important questions. He is a great healer who has helped me in my shamanic spiritual growth."
- Manari Ushigua. Leader and Shaman of the Sapara people of the Ecuadorian Amazon
I remember I first experienced your work in the great barn at 'the No Mind Festival' in Sweden. All I knew about you was that you were leading dance classes. And that afternoon you were guiding more than 500 people into such a sublime space. At one point I swear we were all lifting off flying together in pure light, and I remember I thought that this man .. this man is a shaman. I bow. "
- Chameli Ardag

Movement is Medicine.
Movement is Life.
We support
The Pachamama Alliance and the
Movement Medicine Sponsorship Fund